Explanation of Assessment Grading Criteria and Scoring
Through the course of the semester, we used the Poudre School District rubric to assess our students. Details on that can be found under the ‘Assessment Tool’ tab. Each lesson also had a simple rubric to assess how students plan, create, explore the material, and reflect. While assessing, we also made sure to emphasize storytelling and self-expression, since that related back to both the state standards, Grade Level Expectations and our unit.  All of our students showed improvement. Most ended up being proficient, and the rest were in partially proficient or advanced. Below are some graphs to demonstrate student learning based on scores from the pre- and post-assessments.
​ 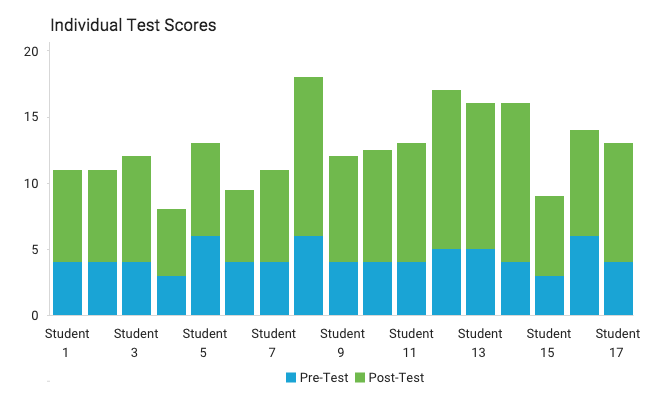 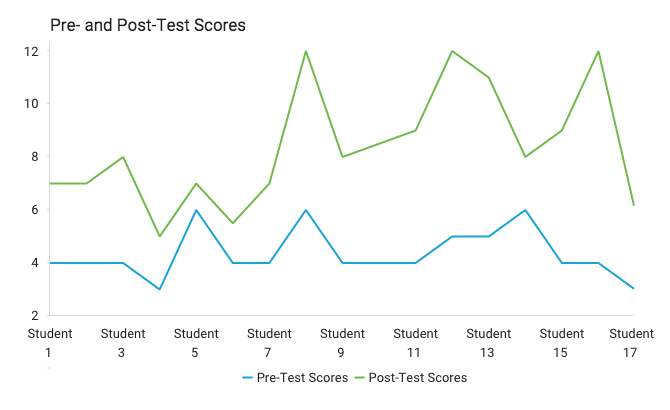 Discussion of  Pre and Post-Assessment Results
Student 1: This student was hard to get motivated in the beginning, but grew to be a consistently hard worker. She also began to collaborate with student 2 on projects. She became very confident in her technical skill by the end of the semester, especially with drawing. Much of her subject matter was consistent the entire unit.
Student 2: At first this student seemed timid, but eventually this student became extremely confident in her work. She really utilized the materials that were provided and came up with very creative ways to use them. She also collaborated well with student 1, providing ideas for projects and working on artwork that connected.
Student 3: At times, this student was unable to participate because of behavioral decisions, but after three or four classes he started to really want to work on his art. He did not always follow guidelines for projects because he wanted to create other things, but he always created artwork that he was really proud of.
Student 4: This student was very quiet. She responded really well to the examples we showed her and used similar ideas while making them her own. She was very thoughtful in the decisions she made and took her time on projects.
Student 5: This student did really well with experimenting and reacting to the materials provided. He worked pretty fast on the required projects but would create artwork that he wanted to afterwards. He was also very observant with things while he and his peers were working.
Student 6: This student was very thoughtful about her decisions and could explain her work really well. She came up with many ideas that inspired her classmates. All of her artwork was very intentional and her thought process was very advanced. She always had evidence to support her decisions.
Student 7: This student is on an IEP so sometimes had to do other things during class, but once we began working more three-dimensionally he really began to focus on what he was doing. He was really excited about the subject matter he used in his artwork and tended to use similar content in all of his projects.
Student 8: Towards the end of the semester, this student became very independent with her thinking and came up with creative ways to react to prompts and materials. She and student 6 worked really well exploring ideas together without have too similar results.
Student 9: Student 9 and 10 worked really closely together all semester. They had really similar interests and would get really excited about what they were creating. This student would work really quickly, but most of the time would produce a lot of well executed art work.
Student 10: This student worked really well with student 9. Sometimes, he wanted to get done quickly, but usually finished everything to meet all the expectations in a unique way.
Student 11: This student was very proud of her work and always wanted to show the teachers her finished product. She had a lot of creative and silly ideas.
Student 12: This student’s strength was storytelling. While he was not always the most creative in the materials he used, he had really intricate stories and came up with creative ways to illustrate them. He was always very positive about art class and worked hard the entire time.
Student 13: Sometimes, this student had a hard time thinking of ideas. She interacted a lot with classmates and reacted to what they were doing, and sometimes made similar projects to other people. Towards the end, when she would struggle we would ask guiding questions which seemed to help.
Student 14: This student consistently came up with unique stories and ideas. He spent a lot of time in the planning process and would have very elaborate stories to go along with all of his artwork. He was great at explaining what he was doing and why.
Student 15: This student was a little more advanced in literacy than his peers, and he utilized that in his art work. He also felt more comfortable working two-dimensionally, so there were a couple projects that were differentiated for him. He was articulate in explaining his art works.
Student 16: This student was very confident in her art work. She and student 17 would sometimes lose focus, but when redirected, she would work hard to finish.
Student 17: This student had a hard time focusing and finishing some of the projects. However, when he did finish, his projects were pretty detailed. He reacted really well to the found-object sculptures and worked hard to incorporate a variety of different materials.


Strengths and Weaknesses of  Assessment Plan
Looking back, I generally think that the unit was successful. Students became really successful in storytelling and creating art that is personally relevant to them. Students also did really well with all of the materials they used and most remembered terminology and techniques at the last class.

If I were to do this unit again, I would think more about motion as a focusing lens. There was not  lot of emphasis on motion because we began to realize we wanted to focus more directly on storytelling and self-expression. Thus, I would take out motion, and maybe do a completely separate unit on it.

Another thing I would change is talking about student art. At the end of each class, we would talk about what students learned and questions they had, but it was not until the end that we started actually talking about their artwork as a class. I was not sure how well they would do at that because of their age, but they understood pretty well what we wanted to talk about and how to answer questions. Also, it was great to see how proud they were it we chose to talk about their art. I would definitely add that into the plan if I could go back.

Finally, the objectives did not always have clear criteria. That is something that we struggled with until the very end. If I did this unit again, I would probably redo all of the objectives to have a better criteria and to really reflect the procedure.